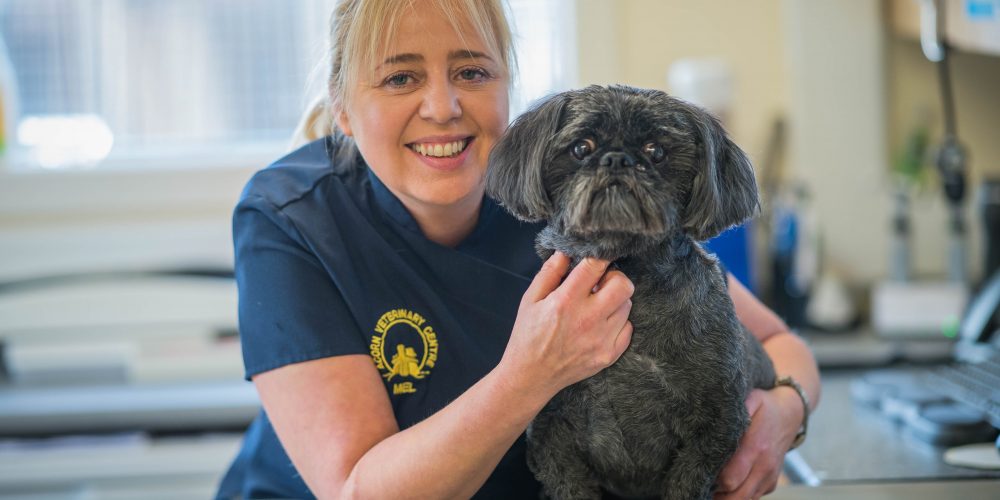 A PLUCKY pooch called Patch has cheated death thanks to a Wirral vet who discovered he had a rare tumour.

The seven-year-old black Shih Tzu was showing no signs of being unwell but unbeknown to owner Cheryl Dolan, from Seacombe, he was a ticking time bomb and months away from certain death.

Cheryl, 44, had been gearing up for her pooch to have a cyst removed from his eyelid at Acorn Veterinary Centre in West Kirby, which is part of Willows Veterinary Group when it was recommended that he have pre-operative blood tests.

With Patch being young, fit and healthy, vet Mel Pryer did not expect any issues to arise but as a precaution offered the tests to Cheryl, who thankfully did not hesitate to say yes.

Mel’s thorough tests revealed Patch had an issue with his kidney function and following further investigation, a scan showed he had a tumour on his parathyroid gland. It was the first time in vet Mel’s 20-year career that she had ever seen the condition.

Although the tumour didn’t turn out to be malignant, the dangerously high levels of calcium it was causing his body to produce would have resulted in Patch dying from kidney failure within 6-12 months and if left untreated for much longer, could have caused irreversible damage.

Vet Mel has worked for Willows Veterinary Group since 2008 and has recently moved with the Acorn team to their new state-of-the-art refurbished surgery in Acacia Grove. She said: “When we did the pre-op blood tests, they came back with signs of kidney disease.

“So we started investigating and found he had high levels of calcium which was being caused by a tumour.

“Never in my 20 years have I come across this type of tumour. It is rare. So I am very relieved we picked it up in the pre-op blood tests.

“The anaesthetic used in the operation to remove the cyst from his eyelid would have caused further damage to his kidneys and in six to 12 months time it’s likely he would have died from renal failure.

“There is no doubt Patch’s life was saved by the blood test.”

Willows Veterinary Group offers a wealth of knowledge and expertise through 25 small animal practices, a referral veterinary hospital, two equine centres and a seven-office farm practice, located across Cheshire, into North Wales, the Wirral and Staffordshire. It is accredited by The Royal College of Veterinary Surgeons.

Cheryl said she couldn’t thank vet Mel and her team enough for saving her canine friend’s life. She said: “From my perspective, those tests are what saved my dog’s life.

“We still can’t get our heads around it all. There was no loss of weight, he wasn’t lethargic, he was just his normal self.”

It was the entirely unrelated health issue with Patch’s eye cyst which prompted Cheryl to take him to see Mel as she explained; “Patch has had a cyst on his left eyelid from birth but Mel said it wasn’t harming him so it was best to only remove it if it got bigger or was annoying him.

“He got an ulcer in his right eye so we were going back and forth for regular checks and on one occasion I said the other eye was gooey.

“It turned out he had one in his left eye too but it wouldn’t heal because of the cyst so she said it was time it was removed.

“It was at this point that we agreed to the pre-op blood test and how glad I am that we did it.

“Mel said we couldn’t operate on him as his kidney function has come back high. So we were back and forward for tests.

“She investigated every disease possible. He was producing too much calcium which was affecting his kidneys but every test that came back showed no actual problem with the kidneys.

“It got to the stage where she wondered if it was something to do with his thyroid so he underwent scans which is when we discovered the tumour.

“It was a huge shock. He’s my baby boy on four legs. He lives with me and my mum and is company for her when I’m at work.

“But the Willows team are brilliant and he received wonderful care. If someone said to me which vets should I use I’d say them every time.

“I wouldn’t go anywhere else. Nothing is ever a problem for them and you can call whenever.

Covid has had a huge impact on our sector which means that we have fewer appointment times and fewer vets to look after an increased demand for our services.

Whilst the majority of clients understand the measures we are taking to ensure we can remain open, a small minority are verbally abusing our team members.

This will not be tolerated, and, if we feel your behaviour is unacceptable, we reserve the right to end the telephone conversation or ask you to leave the premises.

Emergency care must take priority but we will, as always, do our best to help

Thank you for your understanding